Demon Slayer: Kimetsu no Yaiba chapter 204 has been released! It is a synopsis and impression about chapter 204. Please be careful abut spoilers.

[Demon Slayer: Kimetsu no Yaiba] 204 After the battle

Tanjiro which has finished a war with MUZAN.

It was Tanjiro which survived safely, but a left arm and a right eye were deprived of the function.Yushiro left. Tanjirou told him not to die. "You are the only one who will never forget Tamayo." It is unknown what happened to Yushiro

It's decided to dismiss Demon Slayer Corps.The number of pillars that used to be nine has now changed to two...The mission of defeating the demon is over, and it is dissolved.

Those who survived visited the graves of the dead.

Tanjirou, Nezuko, Inosuke, and Zenitsu went to the house where the Tanjirou family lived.I mourn the dead family. 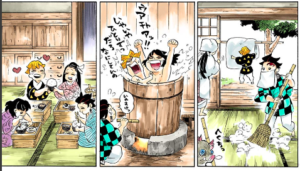 Tanjiro and his friends spend their time cleaning the house and taking a bath.

And a story is to today.
What is the world without demons?

It was a story written after the surviving members.
After the battle, the bond deepened.

I felt the end of the story with many friends and bereaved families appearing.
I thought this was the final episode, but I'm looking forward to next week as I have the next story.

In chapter 205, the times will change, so will Tanjiro and others not come out?
The descendants of Tanjiro are likely to come outI may know whether who and who got married.I'm looking forward to seeing the reincarnation of dead companions!